Scroll to Top
Categorized as
1101
Related

3 Ways To Keep Your Young Kids Safe From Bugs

4 Signs Your Child May Have Autism

4 Negative Situations that Might Escape Your Notice Concerning Family Matters

How to Save Money When Traveling as a Family

5 Tips For Adopting a Family Dog

Getting a family pet is an important decision, especially a dog that comes with a tremendous amount of responsibility. It can also teach valuable life lessons to growing young children, but there’s another benefit of pet ownership for kids. Having an animal in the house may actually reduce the risk of children developing allergies and according to the ASPCA, the earlier and younger, the better.

Research suggests that infants exposed to animals during their first year of life can lead to the  possibility of a child not developing pet allergies. They point to the “hygiene theory,” an idea that early exposure to certain environmental factors, like dust or animal dander, might trigger the immune system to develop a tolerance for common allergens, therefore reducing the likelihood of children from developing these types of sensitivities.

For those of us who already suffer from allergies or children that are sensitive to certain allergens, there may still be another solution – hypoallergenic dog breeds. There are certain dog breeds that shed less much less than others or not at all and therefore they can be better tolerated by some sensitive individuals. Still other things like saliva and skin can still trigger allergic reactions, but one of these breeds may offer relief or at least lessen symptoms of those who suffer:

One might think that shorter-haired breeds like the Dachshund would shed much less than longer, hairy dogs like the Cairn Terrier, but I have had both and I think I still have dog hair from the Dachshund, while the little Cairn doesn’t seem to shed very much at all. Speaking of size, it’s also suggested that larger breed dogs may pose a bigger threat to allergy sufferers due to their size, but there’s no evidence to support that theory.

Regular bathing and grooming should also cut down on the occurrence of negative reactions that can come from their skin, hair, dust and mites. Children should also be discouraged from rough housing with dogs to lessen reactions that could come from their nails, saliva and to avoid the possibility of other aggressive behavior that could lead to biting. This includes other canines they may encounter and should be taught to steer clear of lone dogs wandering unattended and ask an owner’s permission before they approach their pets, even when they are on a leash. 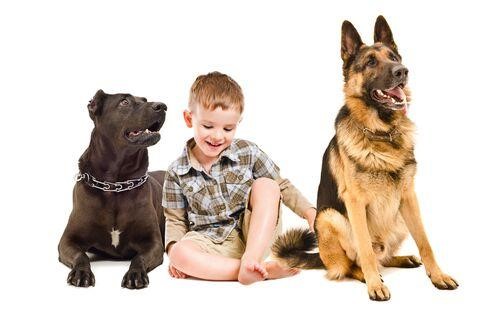 Another approach that should happen before you actually purchase, acquire or the best avenue available, adopt a new pet is to experience a trial period first. Any family member who may suffer from allergies should spend some time with the animal to see if they have any negative reactions before committing to taking them home.

This is also another valuable lesson to teach our children, animals are not toys and they shouldn’t be placed into a category that makes them “returnable” simply because we don’t like them, grow weary of them or any other reason that makes them seem disposable. Pets are another member of our family and should be treated as such, with love, caring and respect.